WHEN SCHOOLS OUT AND SUMMER ABOUT TO COME TO ITS END. Finding time to entertain children can be very difficult. As most parents will probably understand since you start to run out of things to entertain them. As my nephew’s parents have already taken them to the majority of the places around London. It made things difficult to think of a place or activity to keep them entertained.

However, I did manage to plan and take a day off from work just to take two of my nephews, out for a fun-filled day from early morning till late evening. 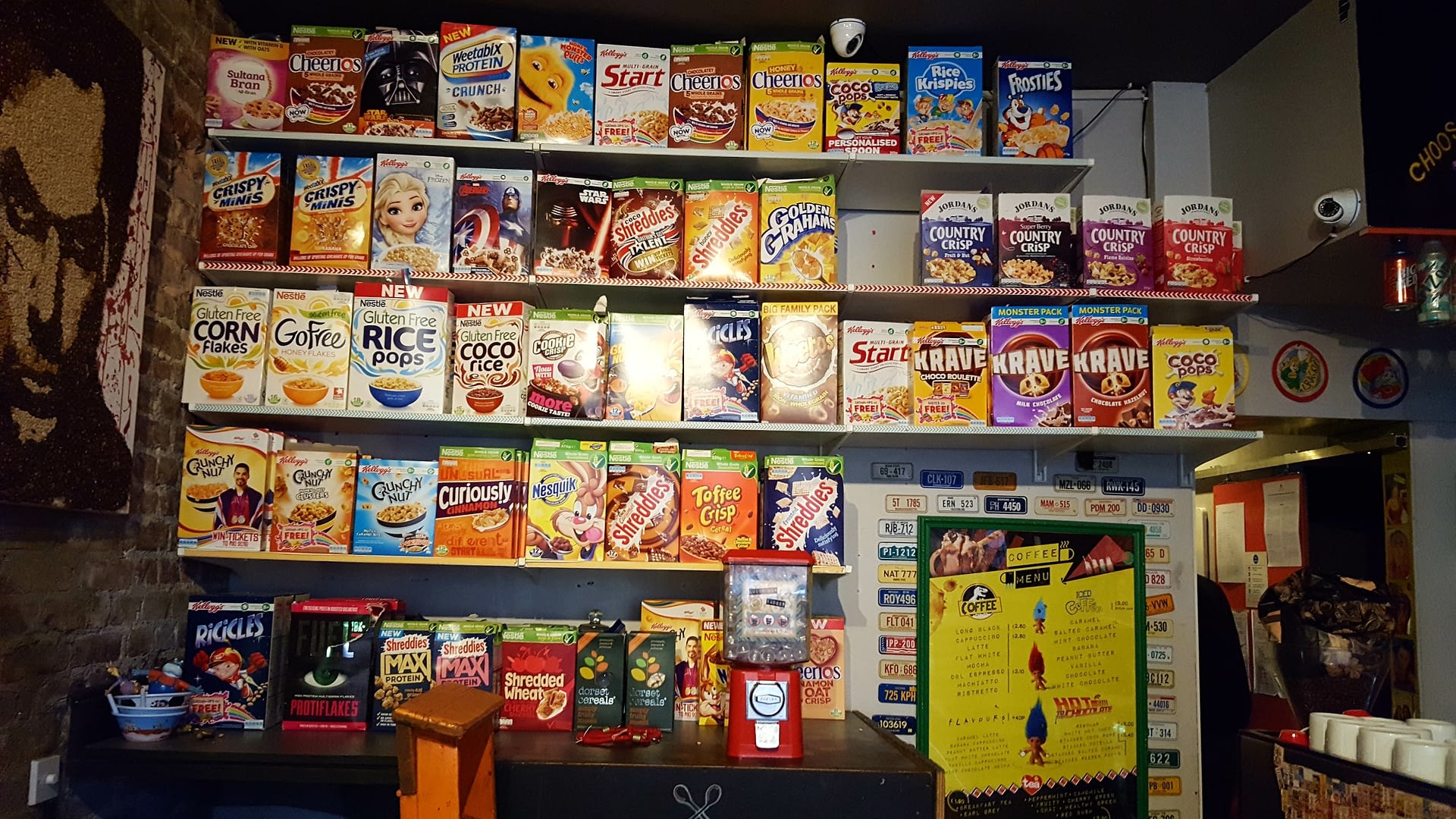 First thing in the morning, me and my nephew’s travelled down via the tube to ‘Cereal Killer Cafe’ in Brick Lane visiting first time to try out these funky cereals that have been displayed all over social media, especially Instagram.

Cereal Killer Cafe is one of the trendiest cafes in the East end of London. Opened back in December 2014. There are more than a hundred types of popular and retro breakfast meals from around the globe, 30 varieties of milk and 20 toppings to choose from. The café was set up by two very trendy twins, Alan and Gary, who both dreamt up the cereal café idea and it is as bonkers as you’d imagine. The entire cafe is packed full of cereal and both 80s and 90s memorabilia.

Cereal from Around the World

I felt like it was a good time to take a trip to Brick Lane and check what the hype was all about.

It’s been recommended by many food bloggers and celebrities across the country and globe, as it’s kid-friendly as well, with the type of cereal they have on offer taking my nephews was not a bad option. There is also a branch in Camden, which is much more modern and brings back childhood memories but due to Brick Lane being much closer to home, we decided to go Brick Lane branch with its retro look. 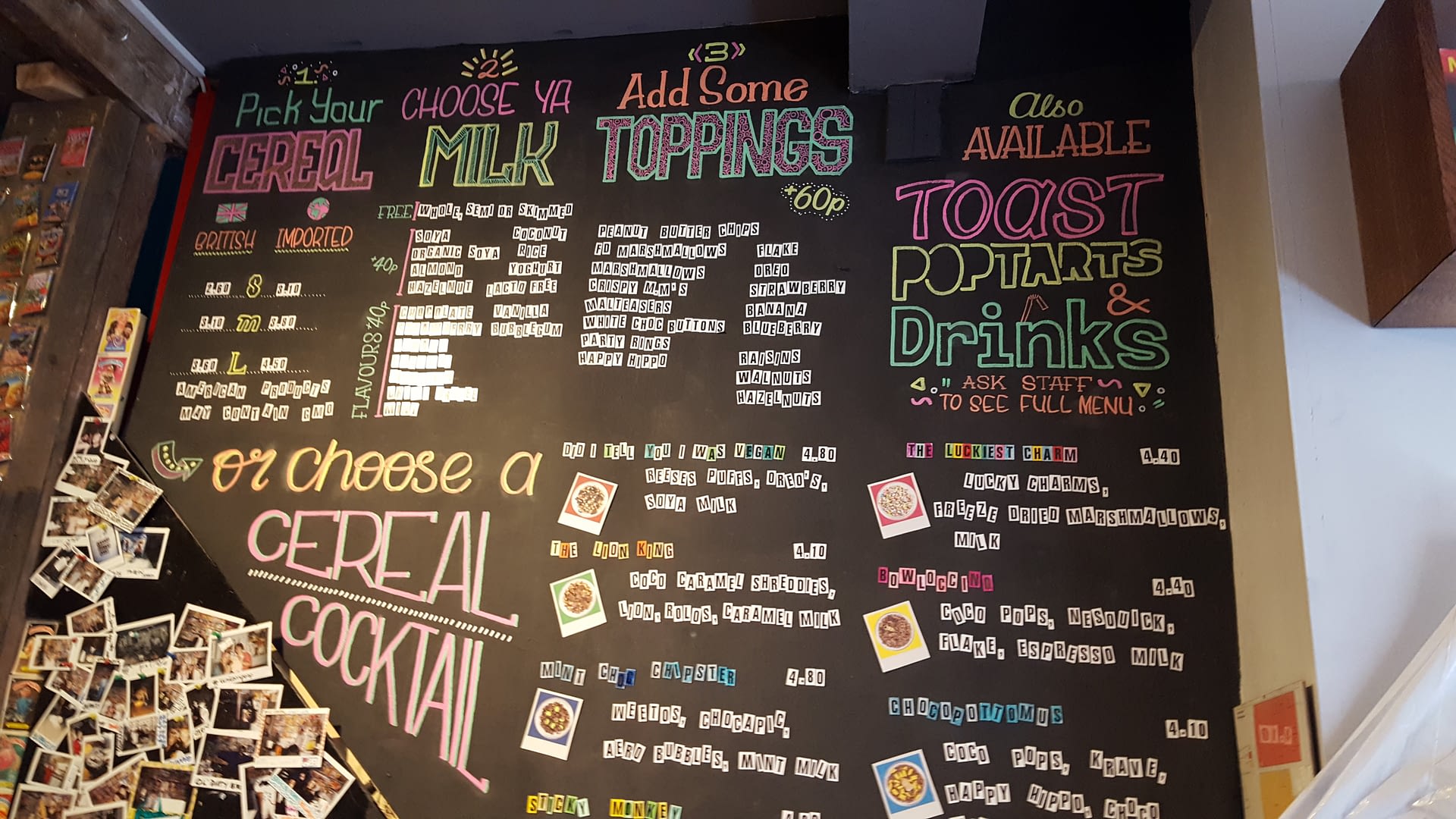 After thinking long and hard about deciding what to get from the ridiculous amount of cereal to choose from menu board above I managed to go for a cereal cocktail ‘Mint Choco Chipster’ cost about £4.80.

This included mint aero bubbles, choco pie, weetos and mint milk. However again with other cereals after a long discussion. My nephews both went for the same cereal which was a ‘Star Wars’ Darth Vader cereal box, seeing as it’s one of their favourite shows on TV. 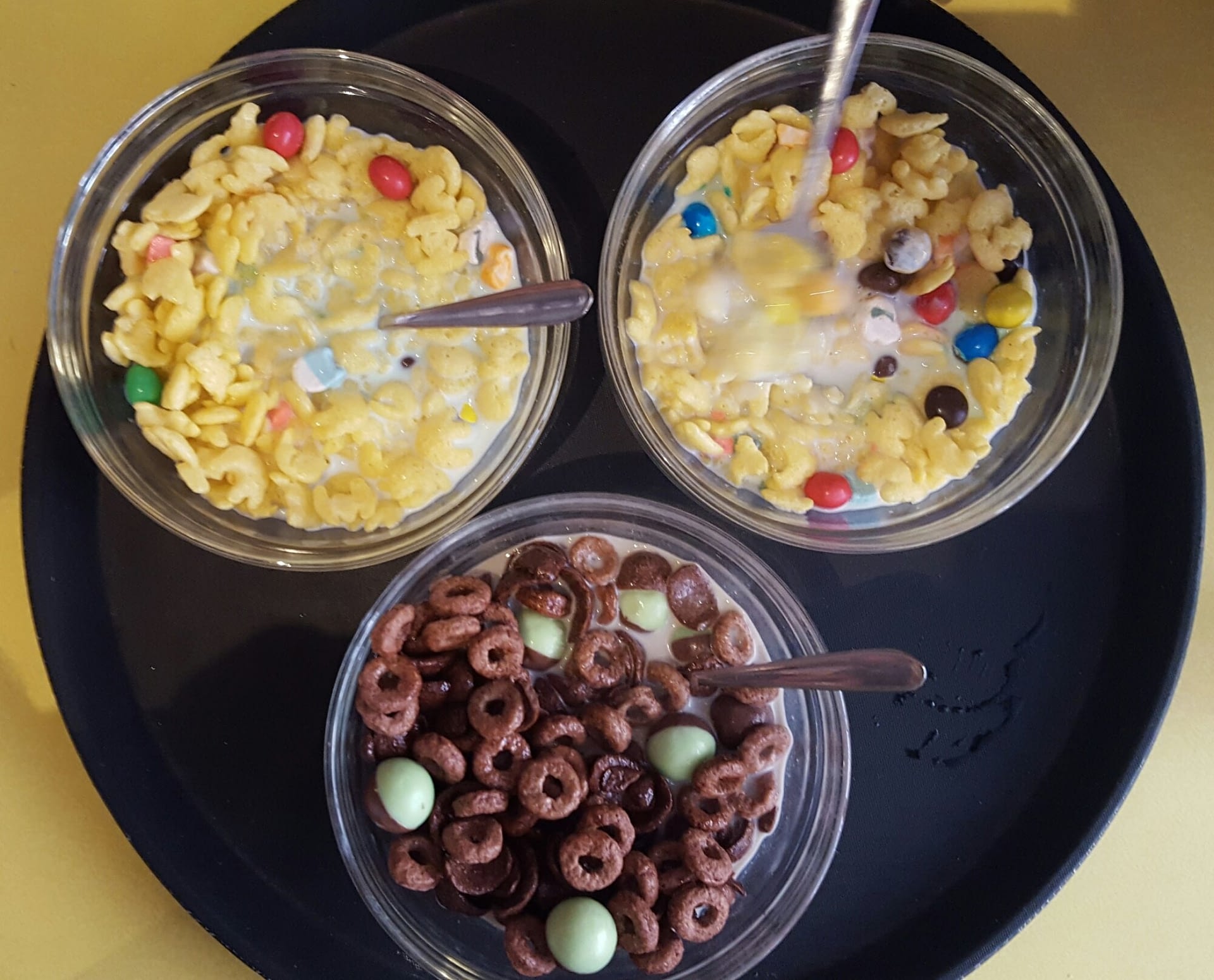 Bottom cereal was mine with other cereals being my nephew’s. They had choices of picking their topping and milk. Since they opted for an individual American style cereal worth around £3.10, with extra toppings. As you walk into ‘Cereal Killer Cafe’ Brick Lane. You’re pretty much surrounded by various cereals all around you ranging from American and British cereals to decide on.

Overall experience, I felt Cereal Killer Cafe was really good to find for an early morning breakfast. Not just because they do cater cereals but desserts too. I would recommend this touristy spot whether it be for breakfast or wanting to visit during the day for some delicious desserts. If you’re around East London or Camden. You will not be disappointed as there are lots of items to choose from such as the different style of cereals, freak-shakes, hot and cold drinks.

After seeing those various cereal boxes and menu what would you end up having? Would love to hear your thoughts. 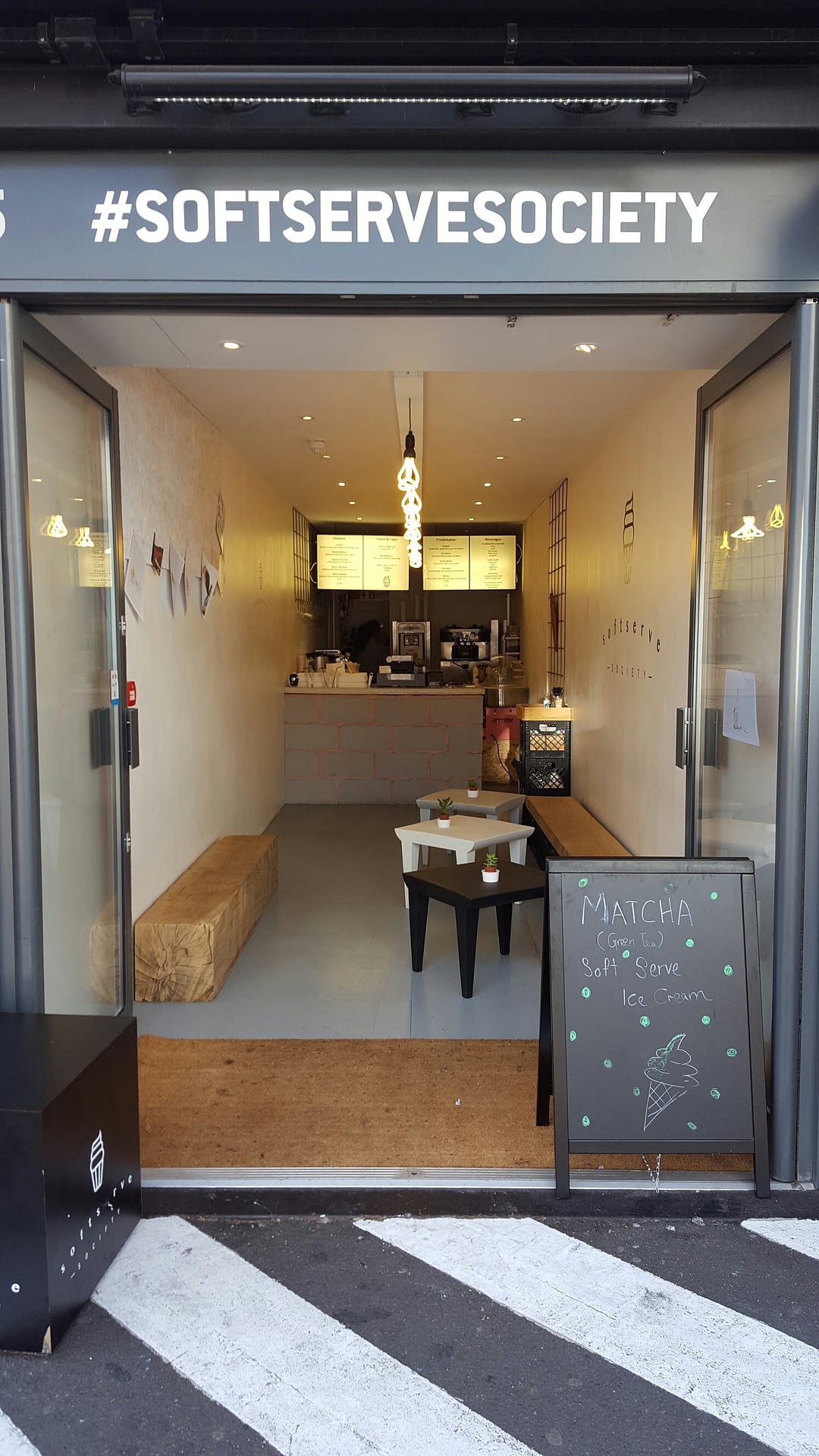 After checking out Cereal Killer Cafe in Brick Lane and walking around the area. Trying to find any other great or cool places to check out that were kids friendly. I eventually took my nephew’s to a dessert bar, who are also well known on Instagram. The ‘Soft Serve Society’ two women behind these desserts bar are super sweet and kind, which goes to show a little appreciation that goes a long way with their customer service. After seeing their menu, I was spoilt for choice with the various amount of flavours to choose from for ice cream, but they do not just serve ice cream they have a range from freak shakes, sundaes, cones and beverages.

Freakshake totals at £7.95 with flavours such as ‘Matcha’, ‘Peanut Butter’ and a few others.

If you’re a lover of green tea, they have that on offer as part of the beverages choices. These flavours above were the different ranges of choices I had to pick for my ice cream I bought, which in the end I opted for ‘Oreo’ flavour for my Matcha Ice Cream and kindly enough the woman gave me an extra choice by choosing another topping, which was sweet of her, but even that was a struggle to choose since picking a flavour when you have so many to pick like above can be very difficult.

The overall experience of this short stay at Soft Society Serve I must see was nice and welcoming. A place worth visiting again, if you would like to meet up with a couple of friends or family because customer service was great even though we arrived super early, they still managed to serve me whilst they were still preparing their ice creams, beverages and desserts, which I appreciated. 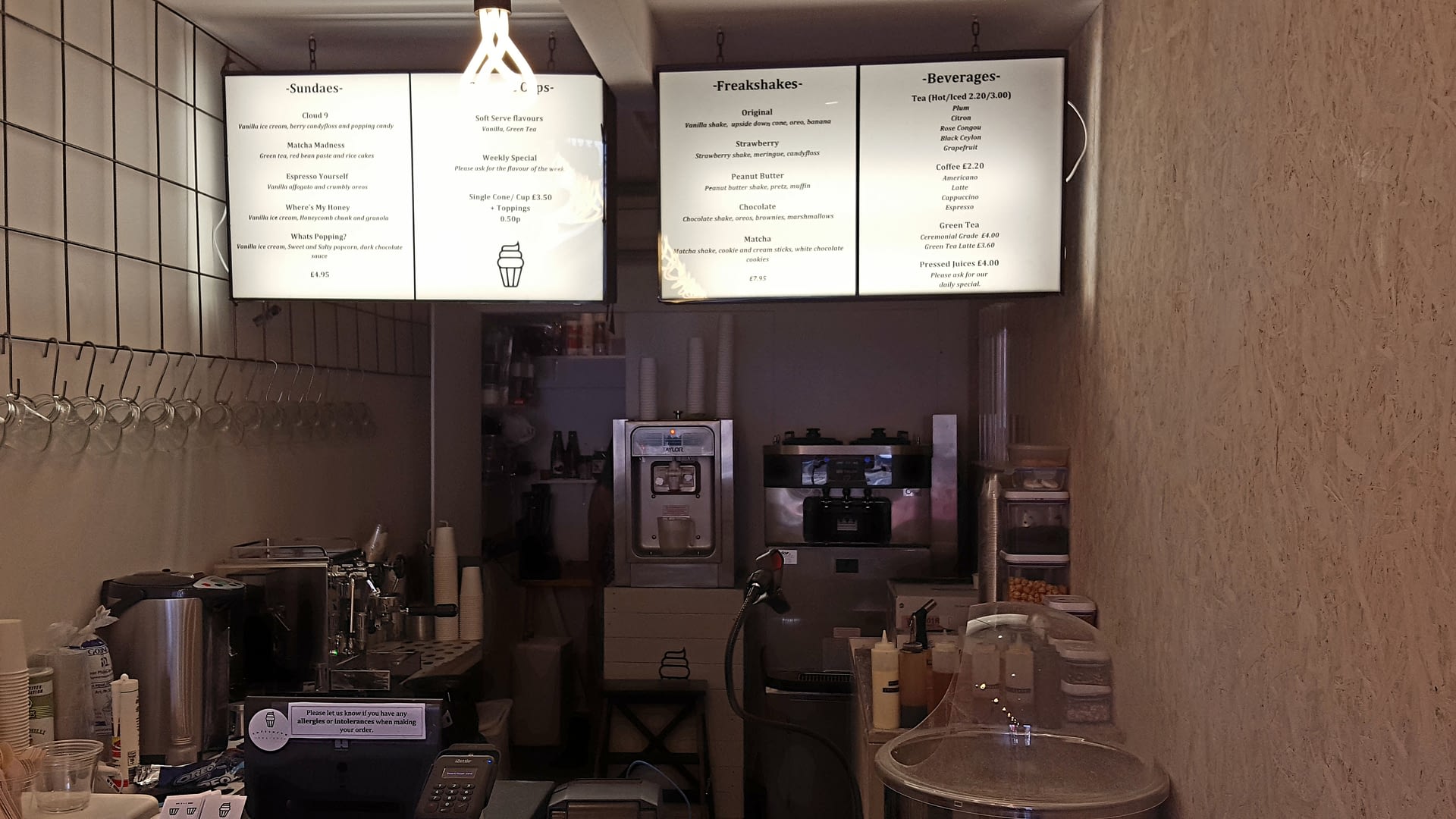 After having these delicious ice cream and cereal during the morning hours in London. Later that same day during the afternoon, I took both my nephews to enjoy some mini golf at Jurassic Falls in Chingford, which turned out to be a good laugh and fun eventually tiring them out following a whole day of activities.

So what do you think? what are your favourite ice cream flavours? I would love to hear from you.