FULL FOODIE PACKED EVENT, 2017 FARE HEALTHY AT LONDON’S ICONIC TRUMAN BREWERY WAS TRULY GREAT. On behalf of The Bloggers Programme, I managed to get my ticket and be filmed for a promo video.

Fare Health, the UK’s first and foremost food, fitness and wellbeing festival, returned over the weekend to East London. The event was held throughout the weekend, where you had so much to do and choose from on the day.

If you are a huge health addict and lover of food. This was one place you did not want to miss out as there was plenty to see, eat and take part in, especially with yoga and discussions on talk shows. Talented people like Naturally Sassy, Shona Vertue and Annie Clark were teaching their skills to those people who attended their Yoga and fitness classes. 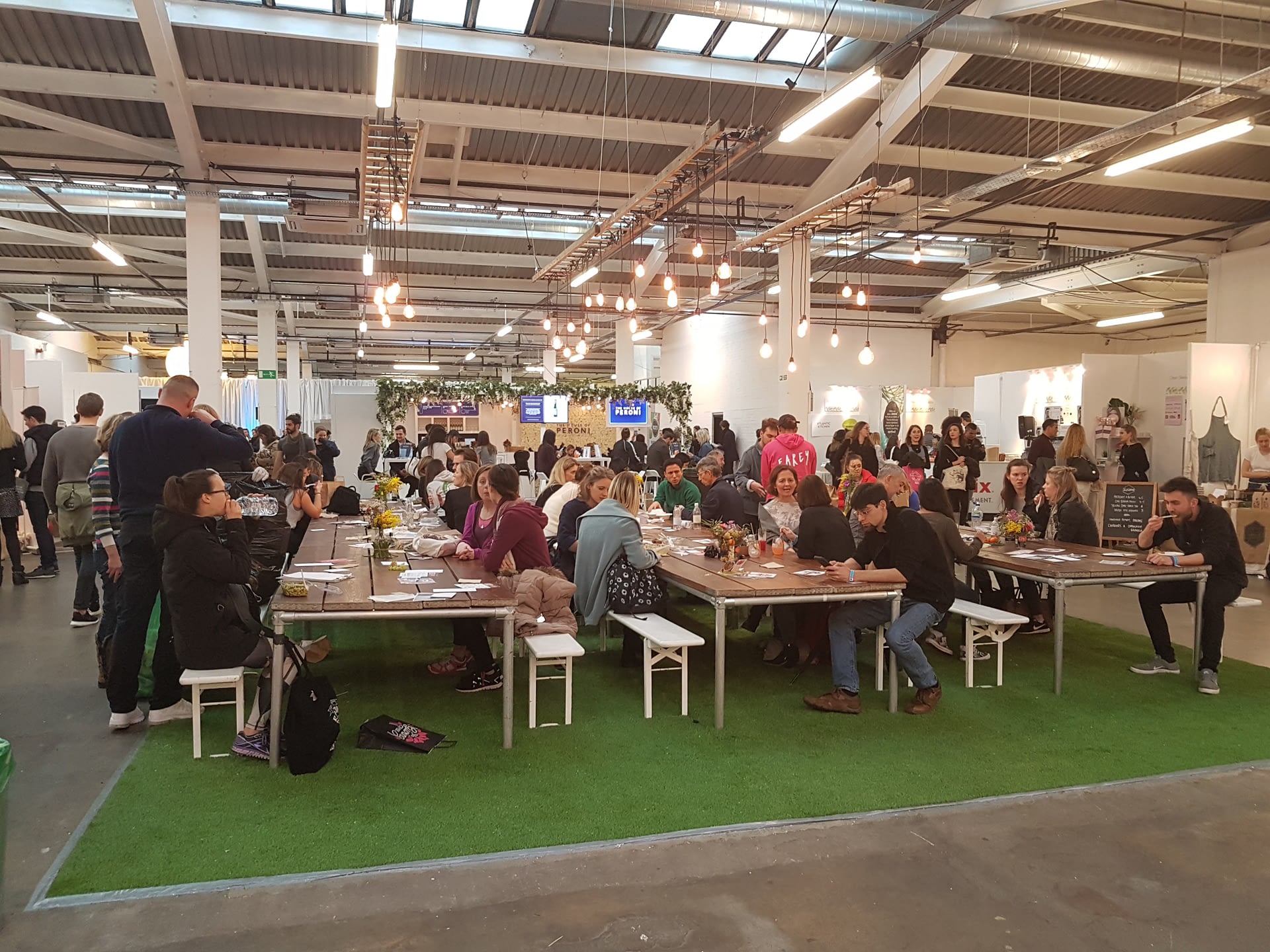 When I reached Fare Healthy, the first thing I did was check out Deliciously Ella treats from her The MaE Deli stall. I’ve always been waiting to taste something new from her new store based near Bond Street station. However, I never really had a chance to go yet. I brought some delicious brownies, as I just love chocolate. Although, the peanut butter cookies, energy balls everyone talks about as well as the other items displayed looked amazing, as you can see below from picture’s I took. 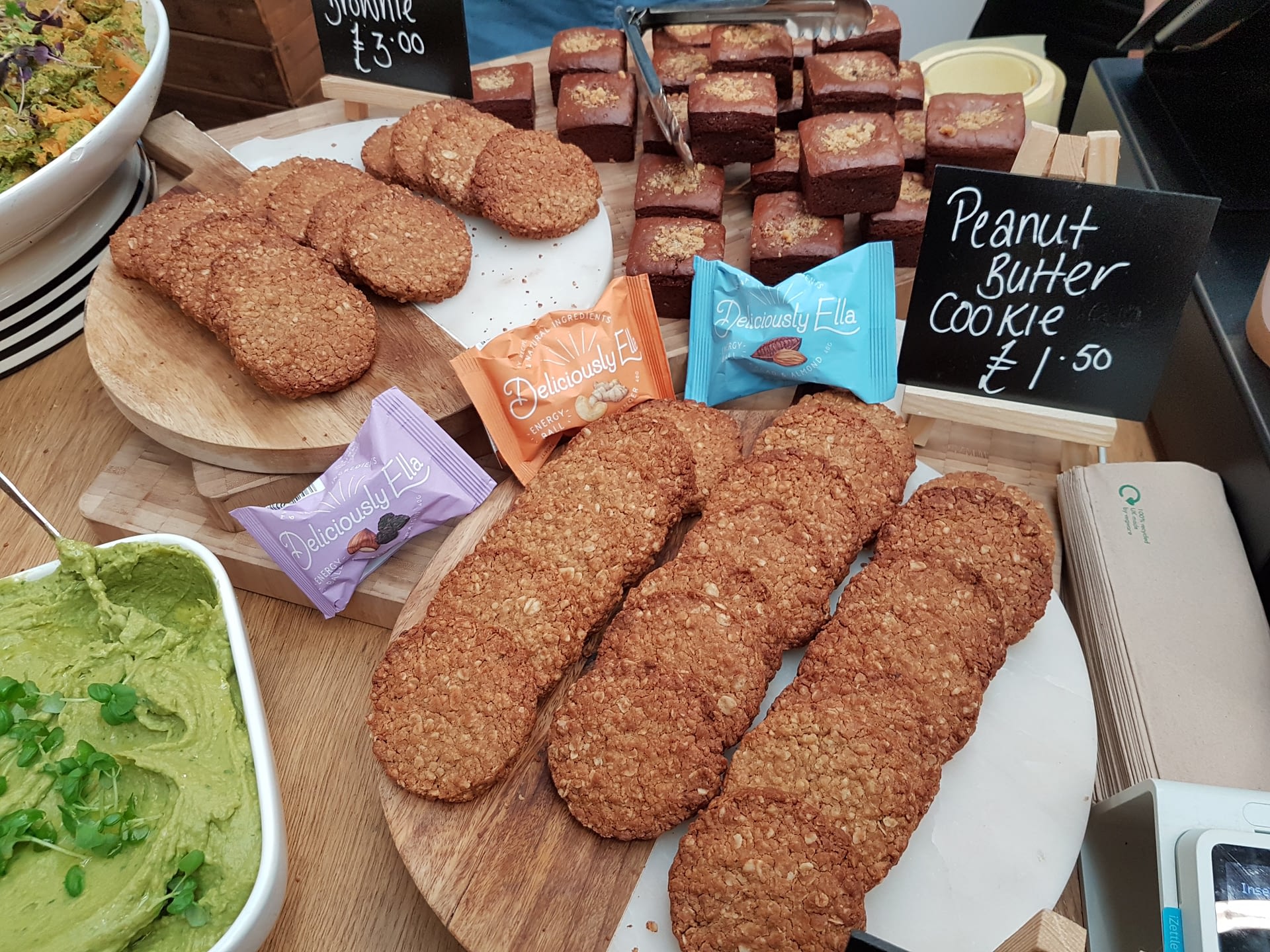 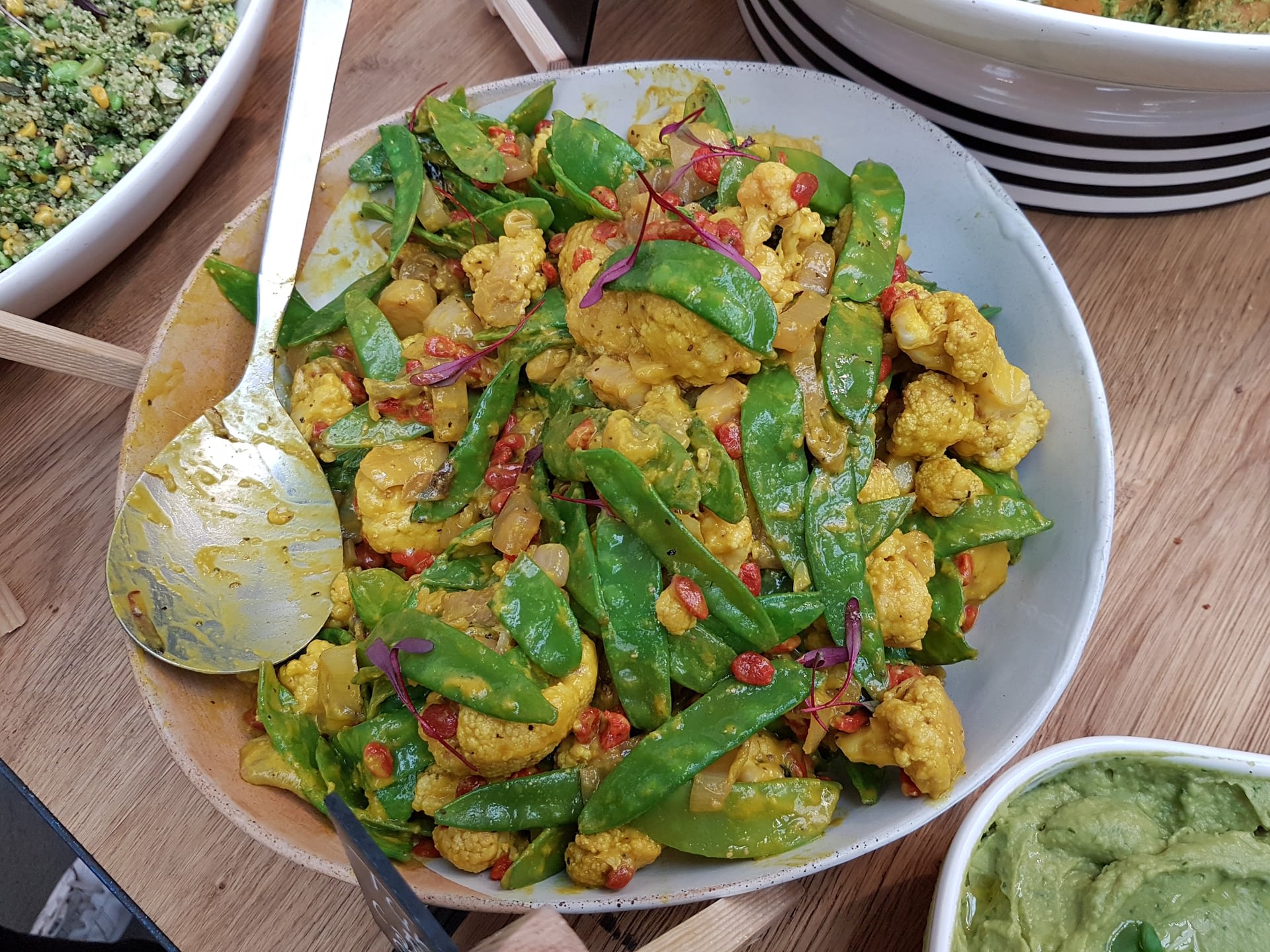 After taking a few images of Ella’s stall. I walked around inside to see what else I could taste and find around at The Fare Healthy event. I bumped into stalls with plenty of Gluten-Free treats. This included Elspeths Kitchen table full of gluten-free, dairy-free cakes laid out. 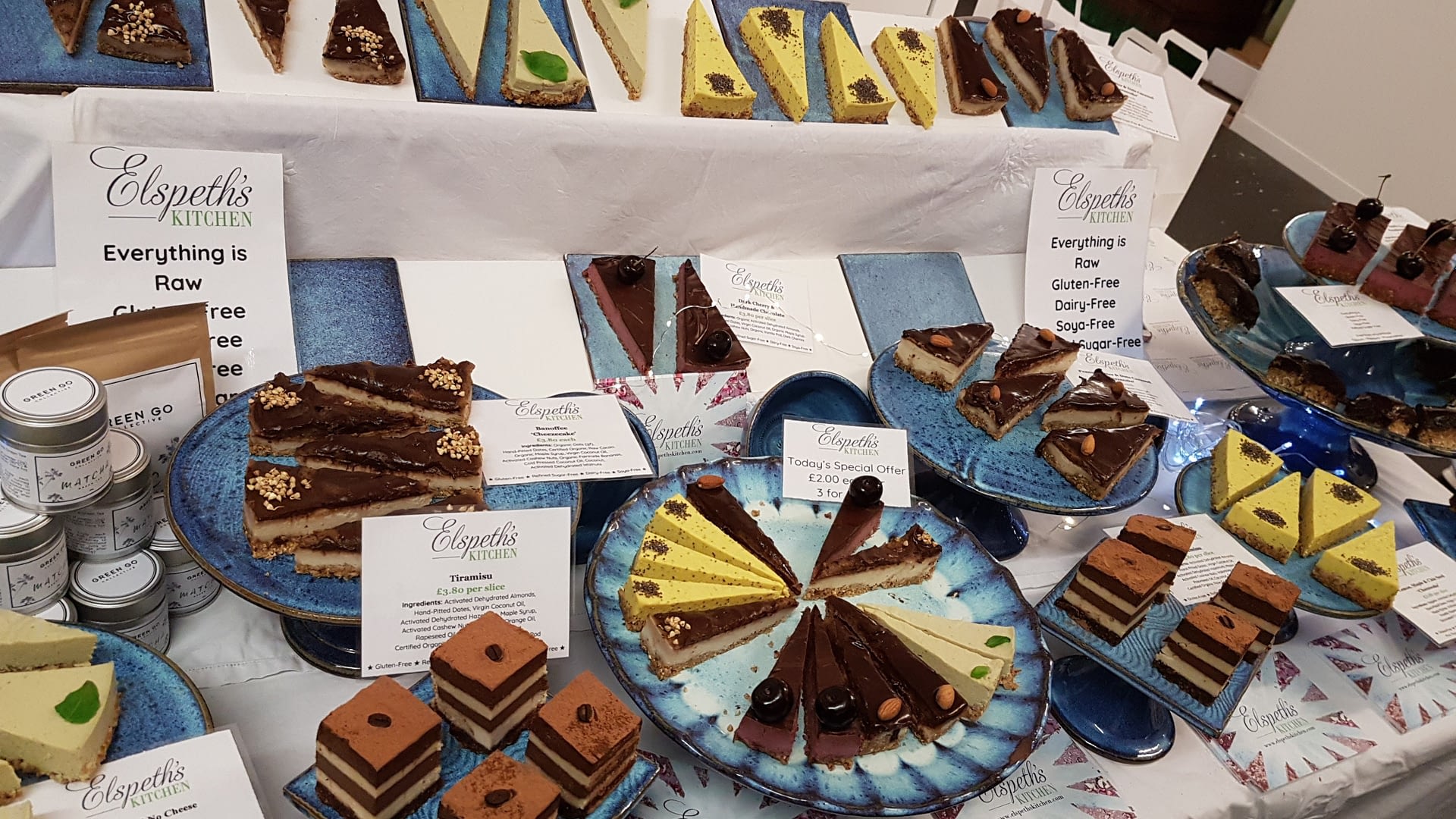 Food at the event

Pip and Nut had few tasters for people to try. I did find these quite dry but it’s always nice to have a taste and see what Pip and Nut are all about. After that, you could see Tom Hunt‘s stall placed with Naan and vegetables to give it an Asian mix to the food. Another stall I saw on the way was these medicine Plenish juice, which is pretty well known around local stores like boots.

Finally, I got to know more about these products from Optiat. What they do seems useful as Optiat recycles all the coffee grounds, which usually goes to waste and reuses them for cleansing your hands. I had a try and it gave a slight scent as well as it smoothened the skin. However, it does seem like a great use of wasted coffee ground into a natural exfoliator. 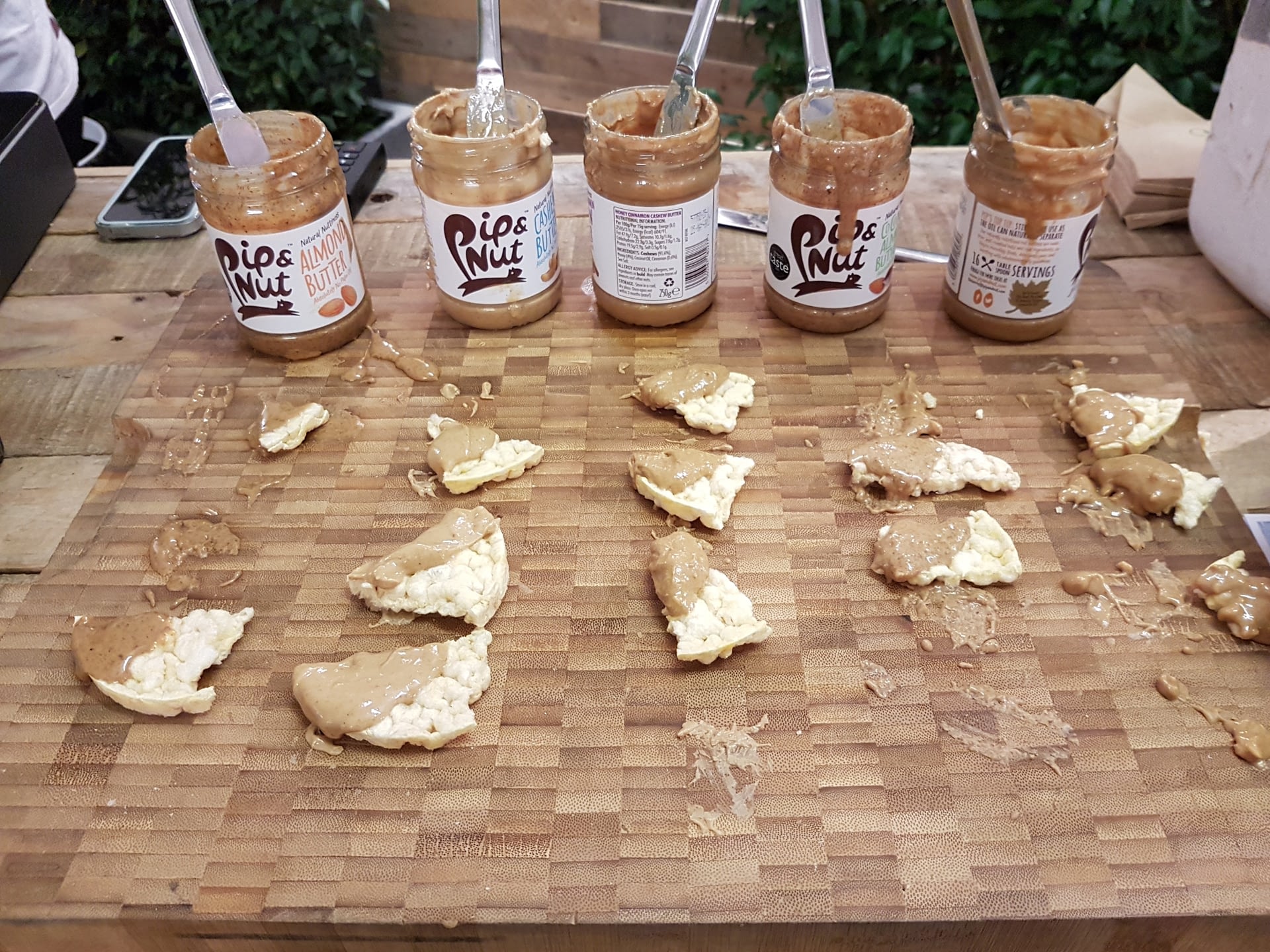 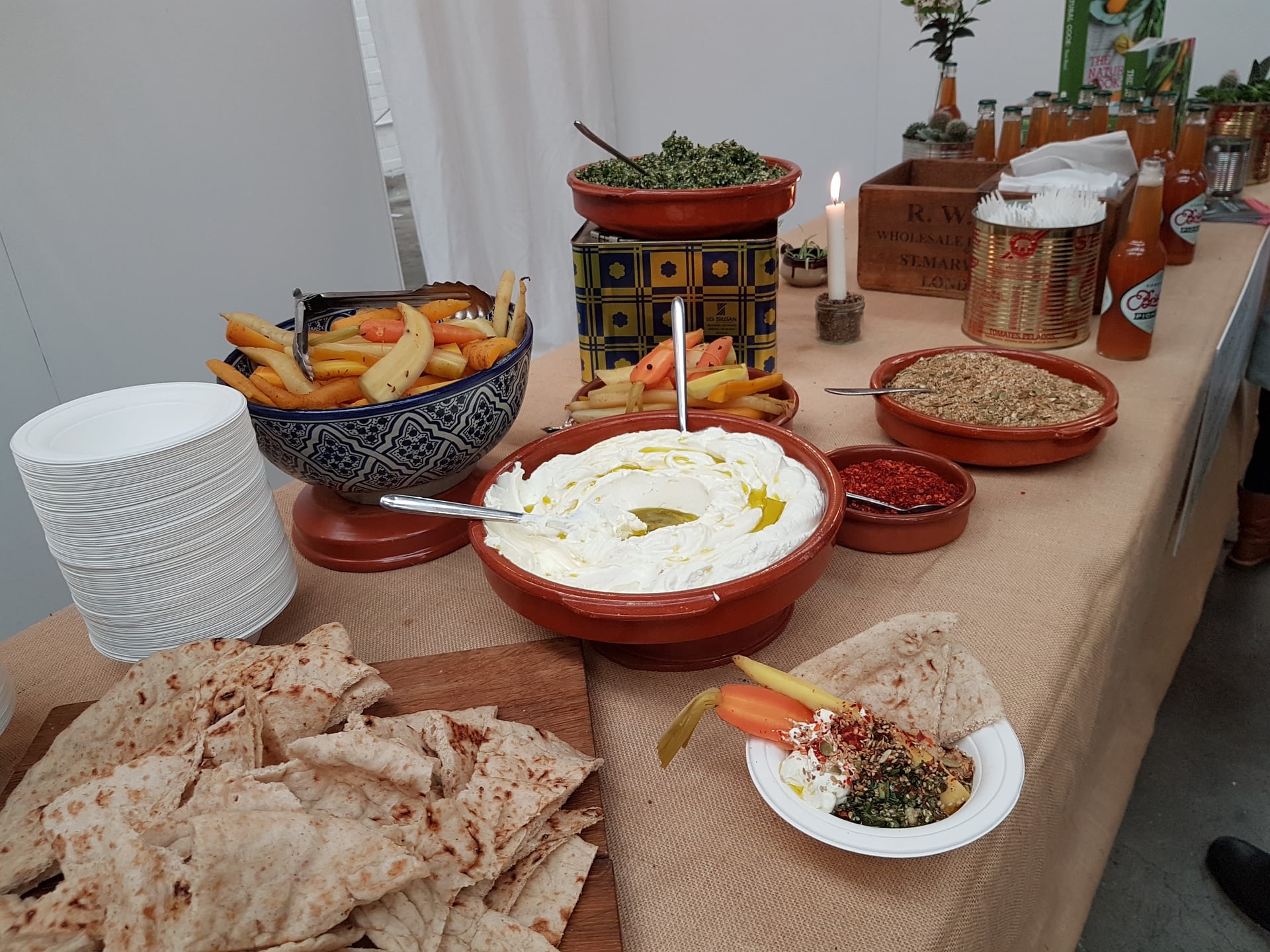 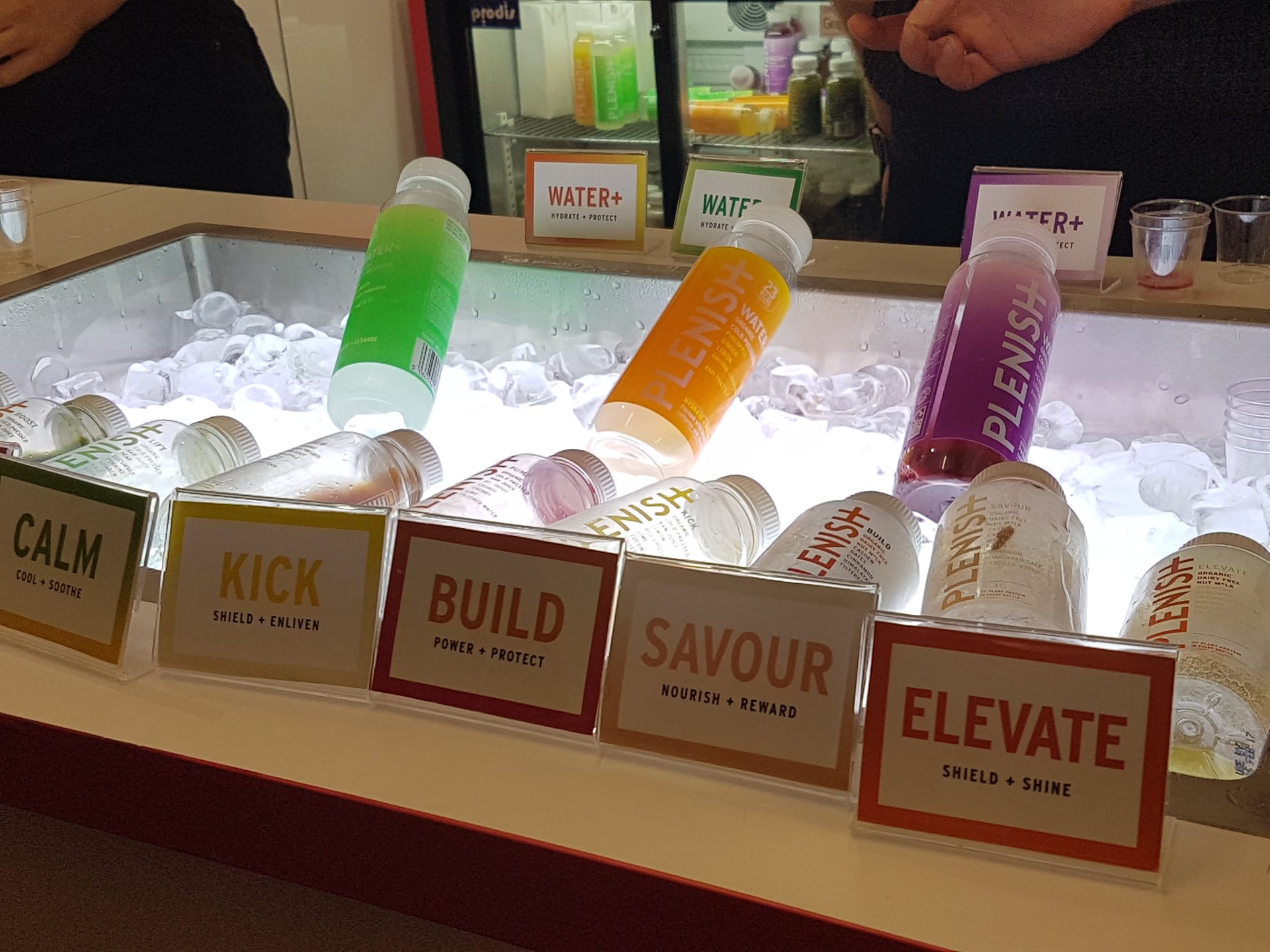 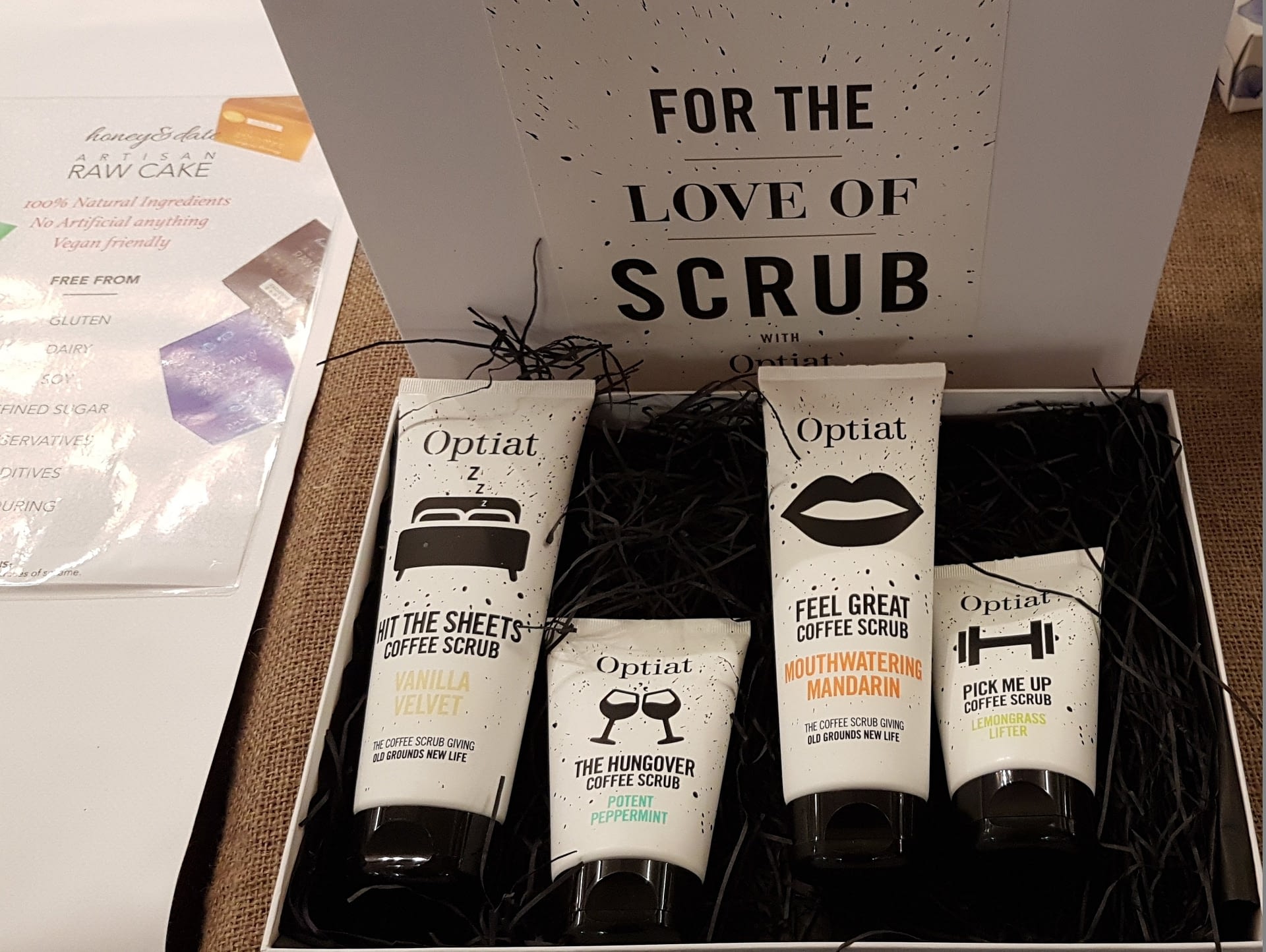 After roaming around waiting for Ella’s talk with Martin Morales midday. The time was here to queue up and take my seat towards the front. I did manage to film some parts of her talk, which I have just uploaded on my Youtube channel. Be sure to subscribe as I will be uploading part 2 soon.

I thought Ella did well despite being thrown some tricky questions by Martin. Also, speaking in front of a large audience is not easy either. For example, questions she got asked were like? what will you do 5 to 10 years down the line? Whether a restaurant is an idea in mind down the line or sticking with just Deli’s. To be honest speaking in front of a large audience can always make you feel nervous. 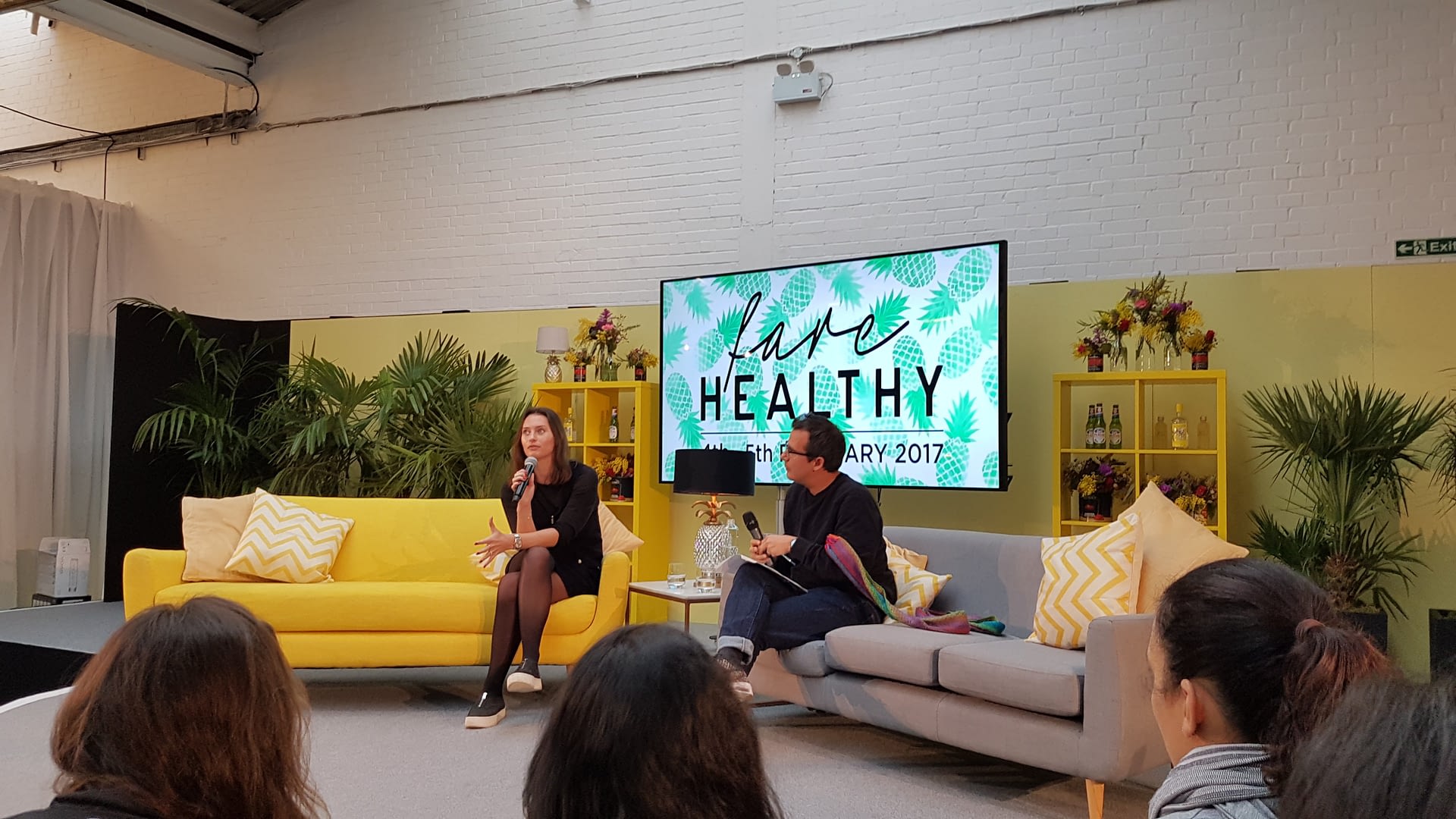 After Ella’s live talk show, I got to see these really talented bloggers/vloggers Saskia Gregson-Williams @niomismart and @izyhossack who gave an insight into their blogging careers and influential people. I missed out on the ending when questions from the audience were asked, as I got caught up to record a promo for The Bloggers Programme but I did manage to record some parts of their talk. At the end of the show, all three food bloggers did a book signing at Waterstone, which was located just outside the main stage for their recipe books.

If you love healthy food and want to try something new for a change in your diet then these three books below will be ideal to have a read. Click on the books below written by Naturally Sassy, Izy Hossack and Niomi Smart to purchase each book and have an insight into their published recipe books. 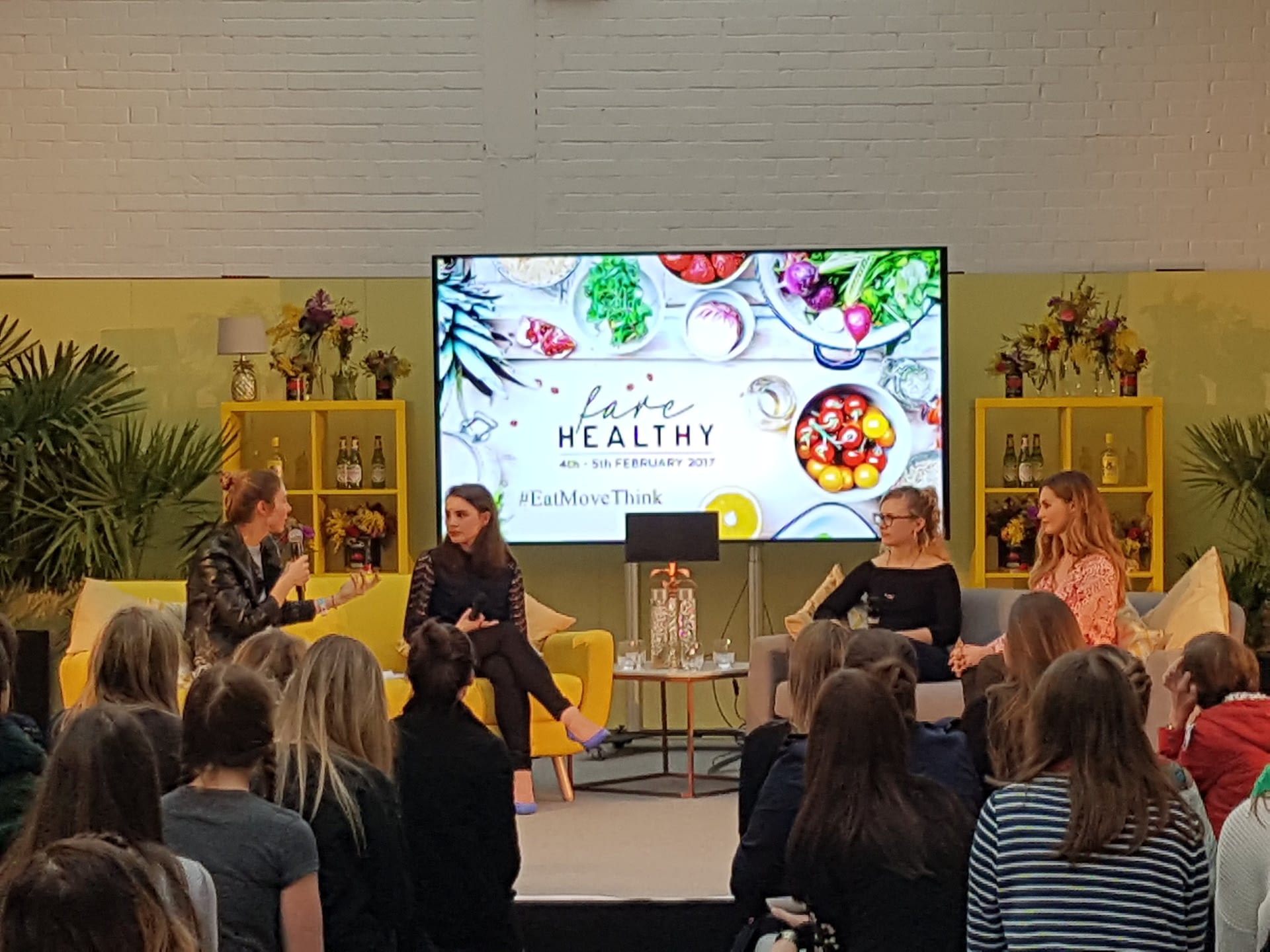 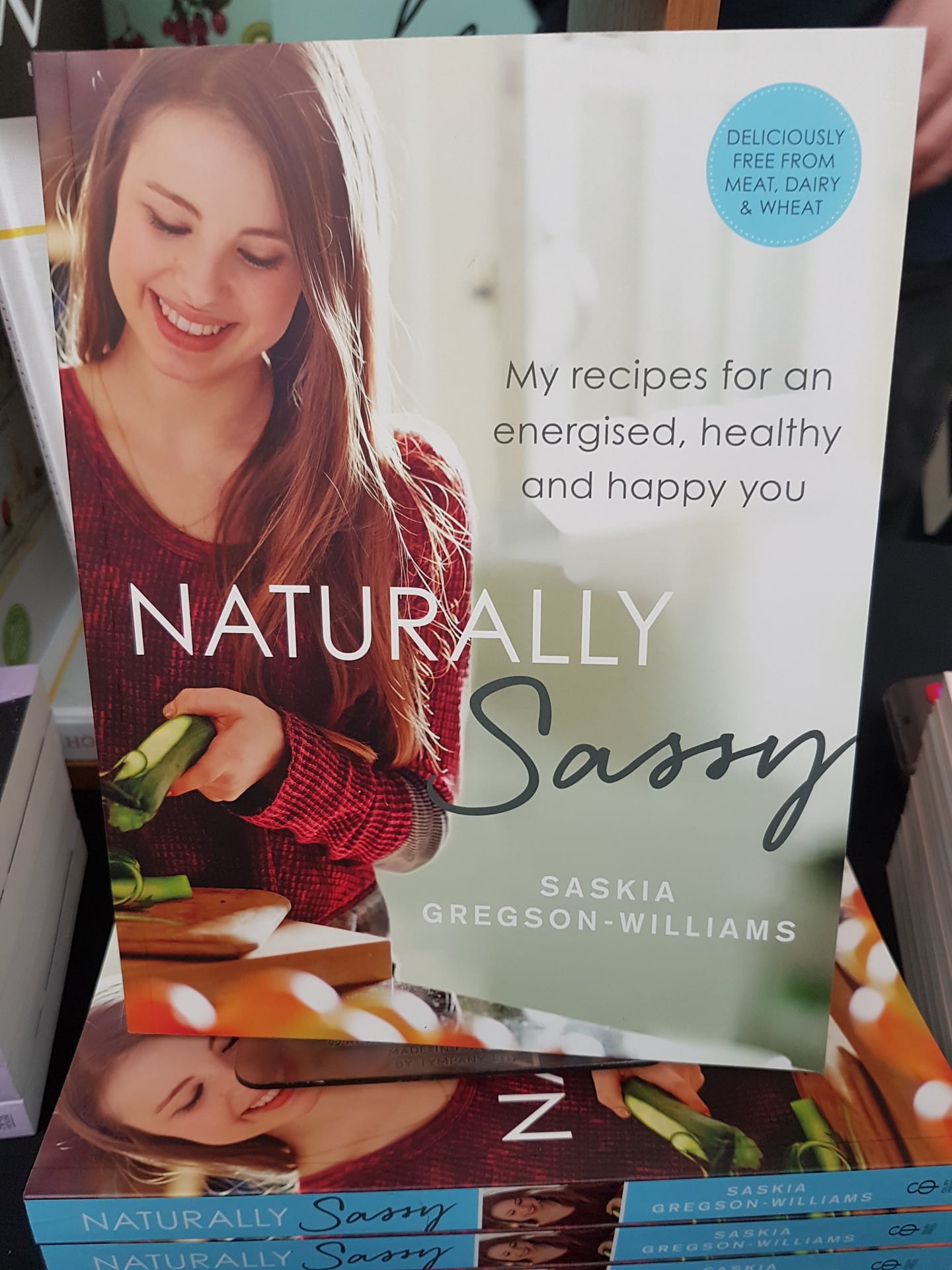 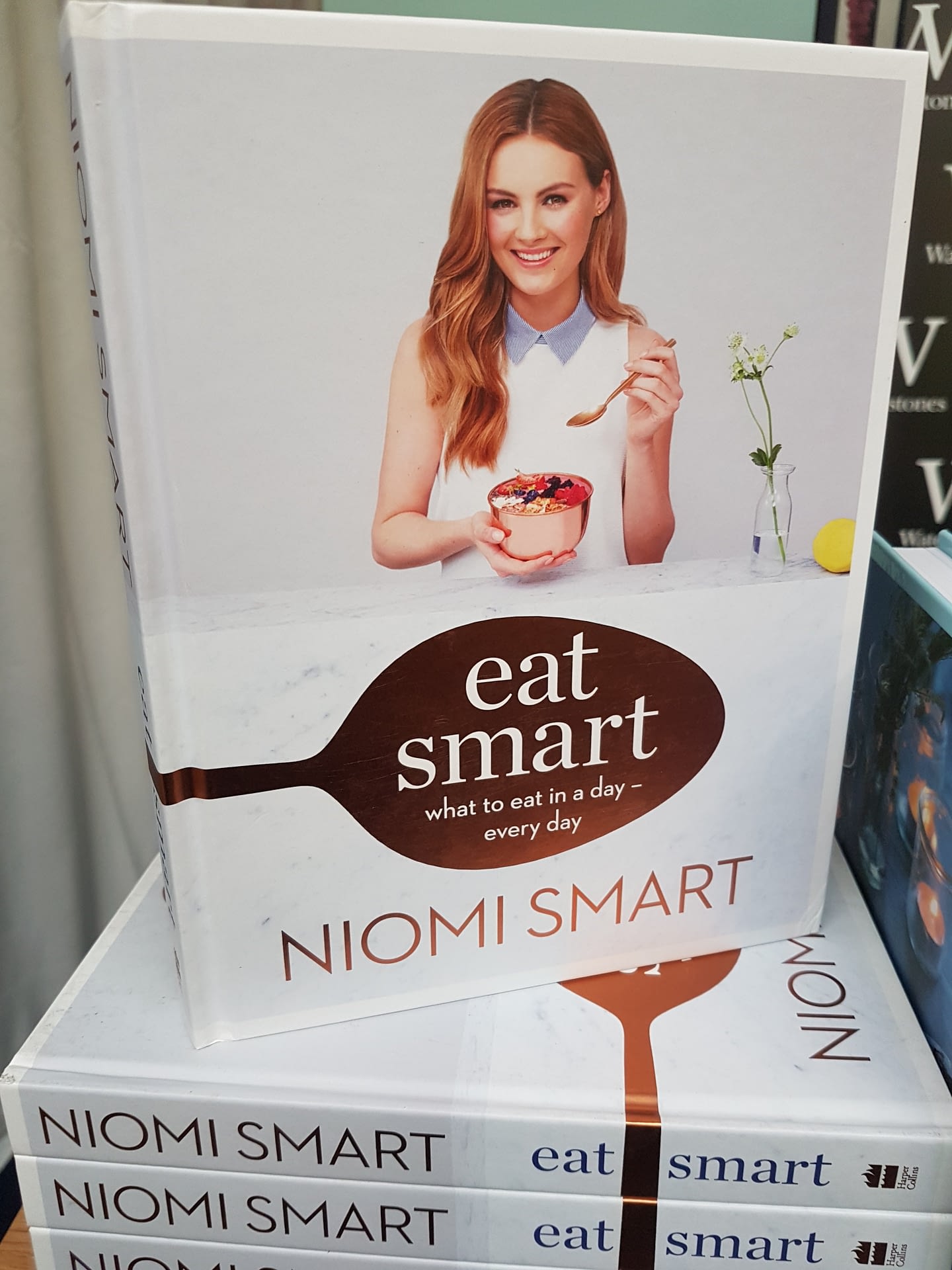 Follow live talks on the main stage and book signings. I managed to grab some food as I was super hungry as these live talks did go on for some time. After walking around each stall deciding what to have for lunch. I saw these really nice looking gluten-free pancakes from Pip and Nut x peardroplondon. There were few options to choose from such as Chickpea and Elvis Presley but I opted for the below coco-nutty buckwheat. 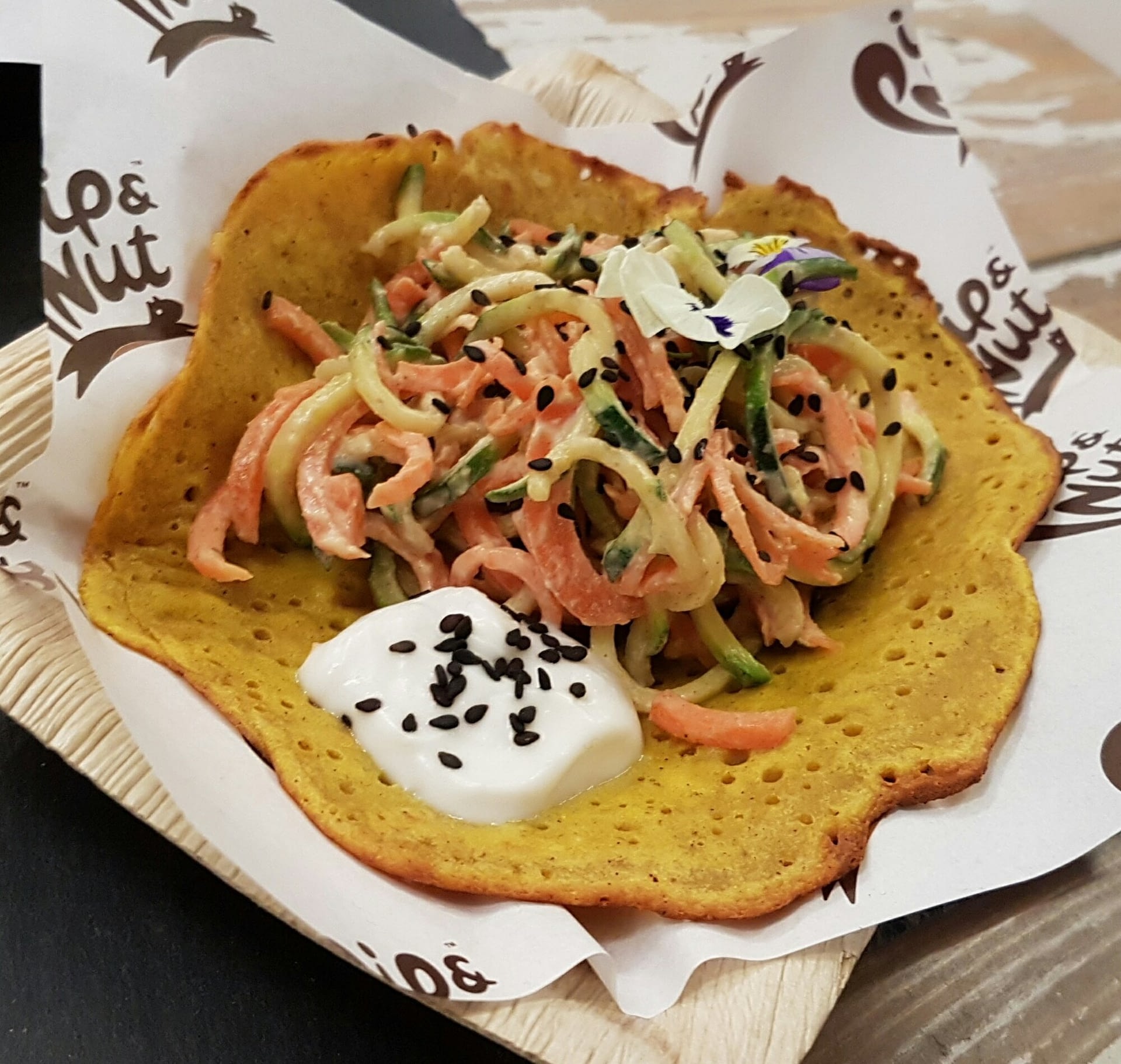 Coco-Nutty Buckwheat (What I had) 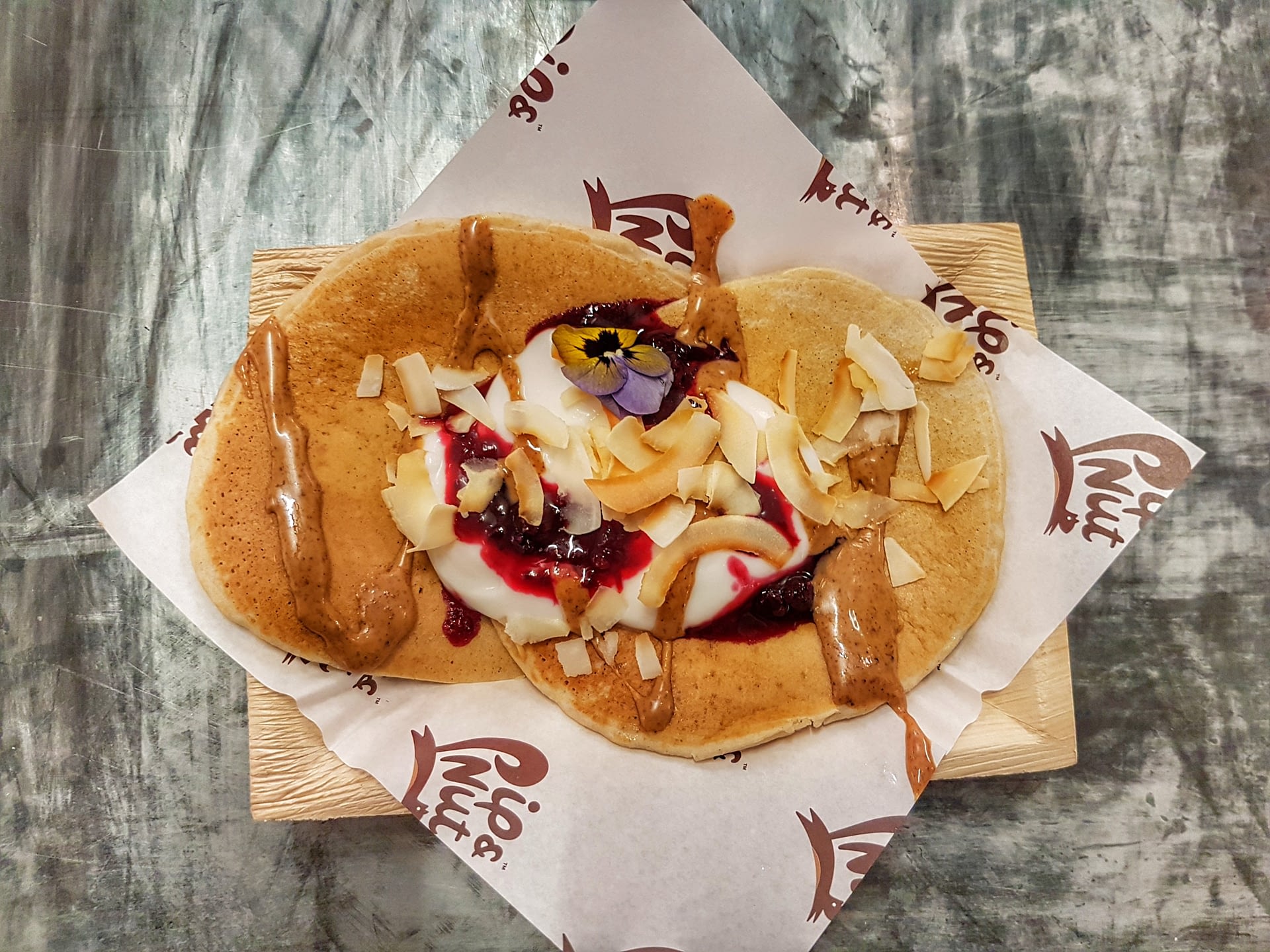 For dessert, I got to try this yummy gluten-free mint chocolate ice cream from Oppo Ice Cream stall and wrap it up from the food and drink side at Fare Healthy. I tried this coffee in a cone Matcha latte’s on the go, after seeing a few images on Instagram, where I bought Matcha Latte filled with chocolate in a cone. I found this to be a great combination especially for those matcha lovers, it’s matcha heaven. This was from a pop-up stall called 30 Degrees South there relatively a new start-up company and with exposure from social media, I’m sure it will do great. 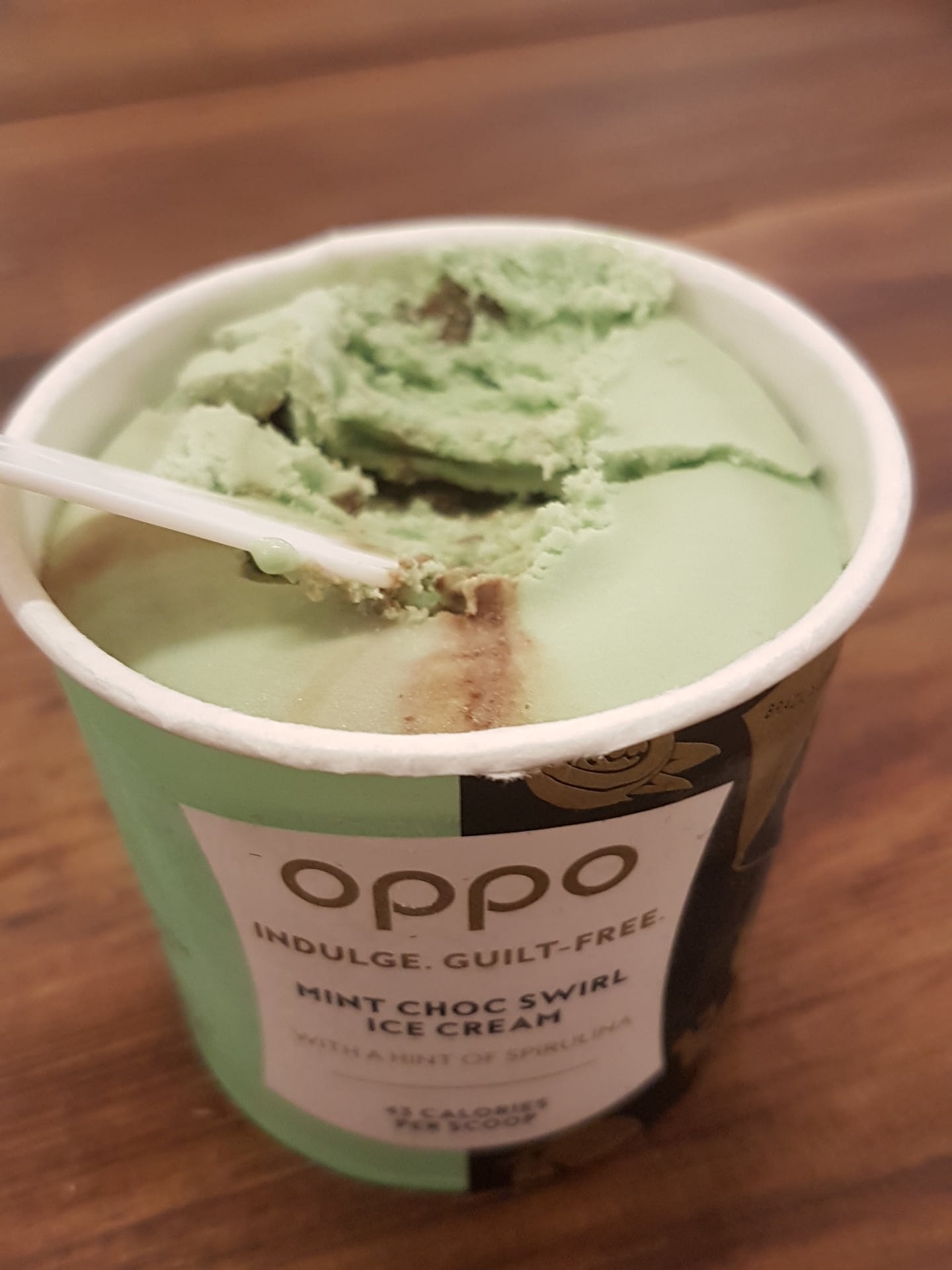 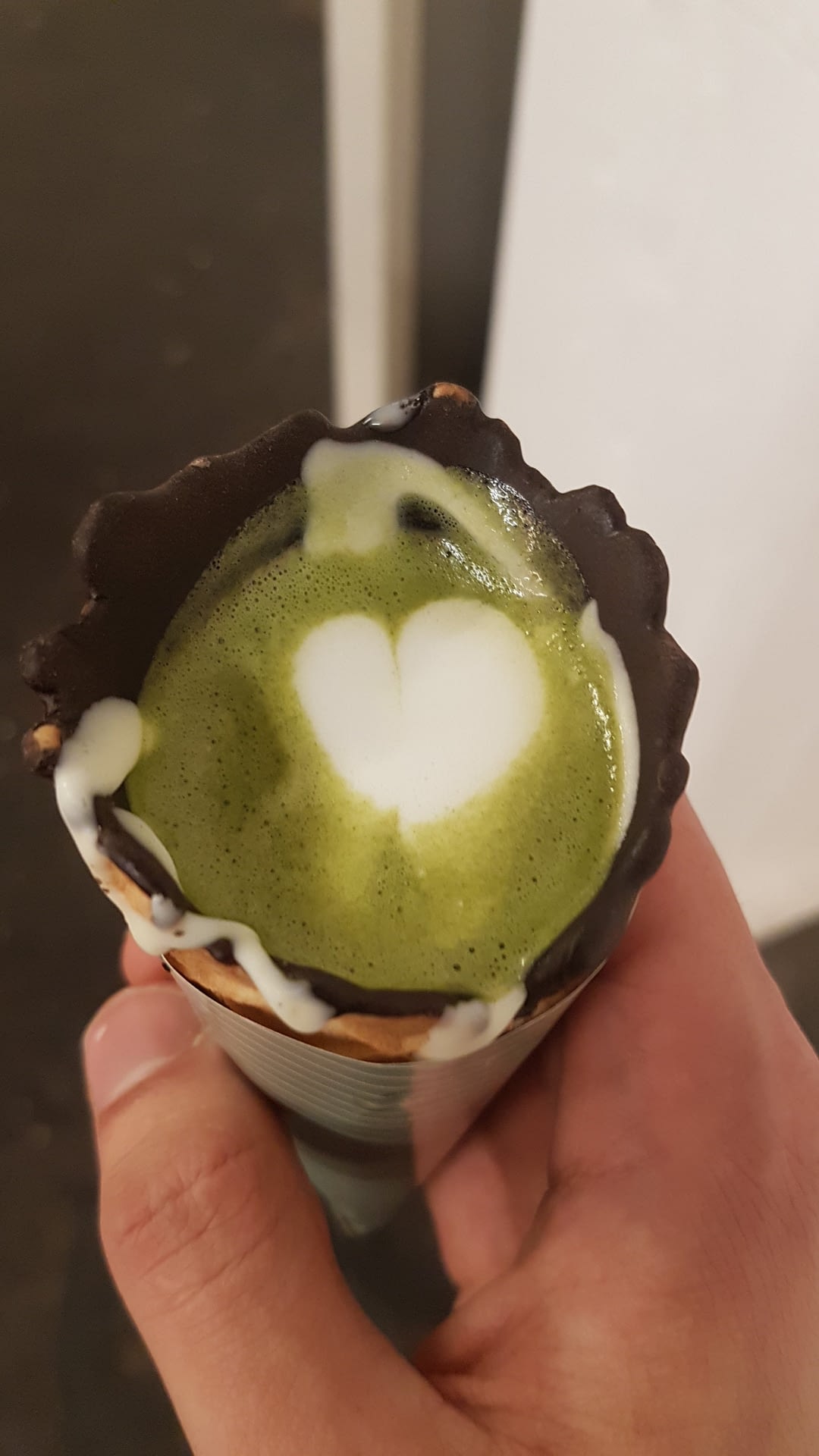 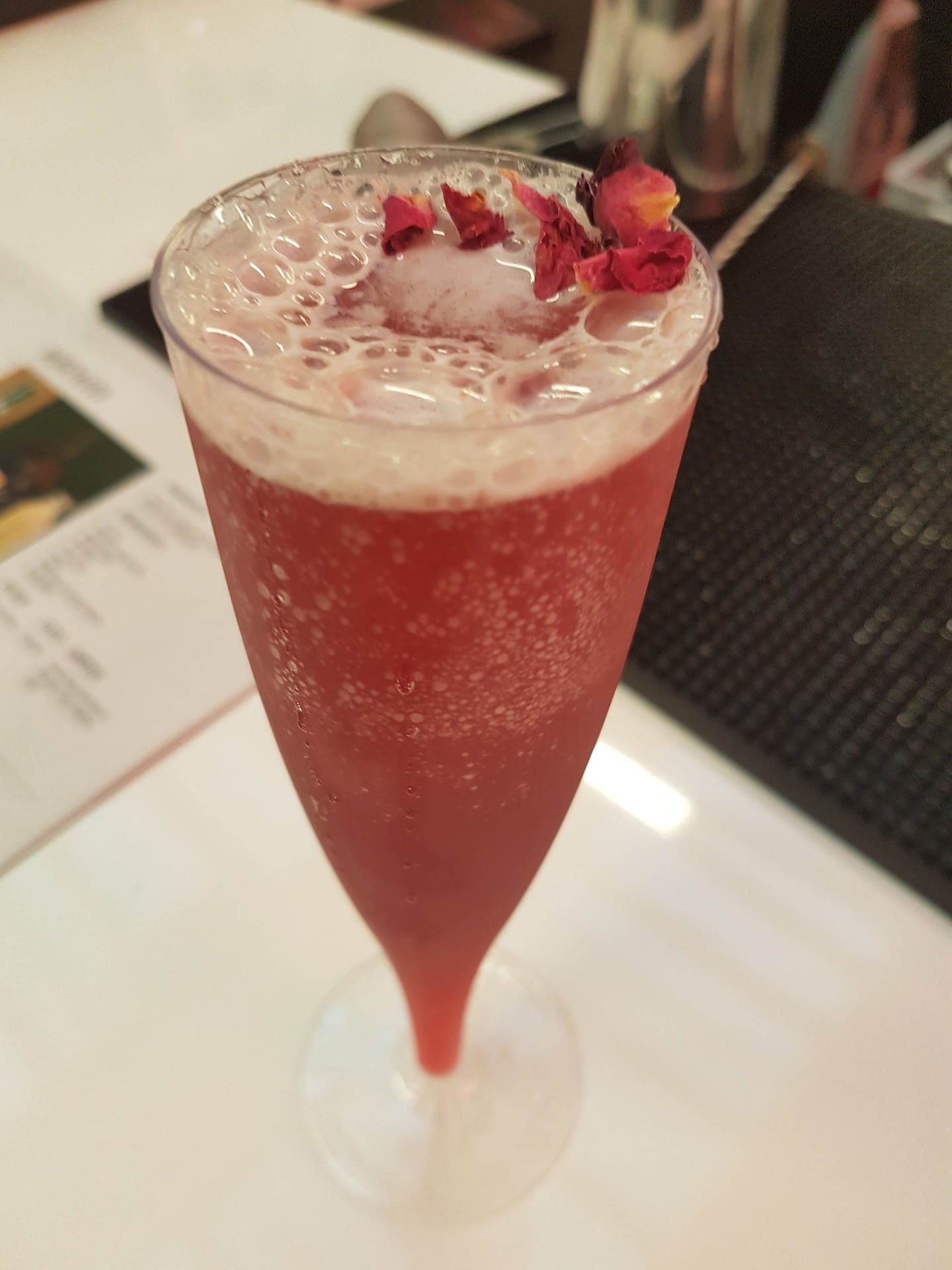 Funny enough as I walked around, I was spotted by Jax Coco, who messaged me through Instagram to have a mocktail on them, which was nice of them. The above mocktail called ‘Healthy 75’ contained passion fruit puree and lemon juice topped with rose petals.

One thing for sure was this bloomon wall and flowers on display, looked beautiful here and there sure did stand out with various colourful petals. The perfect setting for the living room. Also, people got a chance to write their own little resolution/goals for the year as well as personal notes on the wall to share with the rest.

Towards the end of the play at Fare Healthy on Vitamix stage. I got to see the ever so popular Lifestyle Blogger & Vlogger ‘Niomi Smart’ preparing a quick morning breakfast for the audience as well as talking through the steps she took to make her oatmeal porridge topped with strawberries and granola. 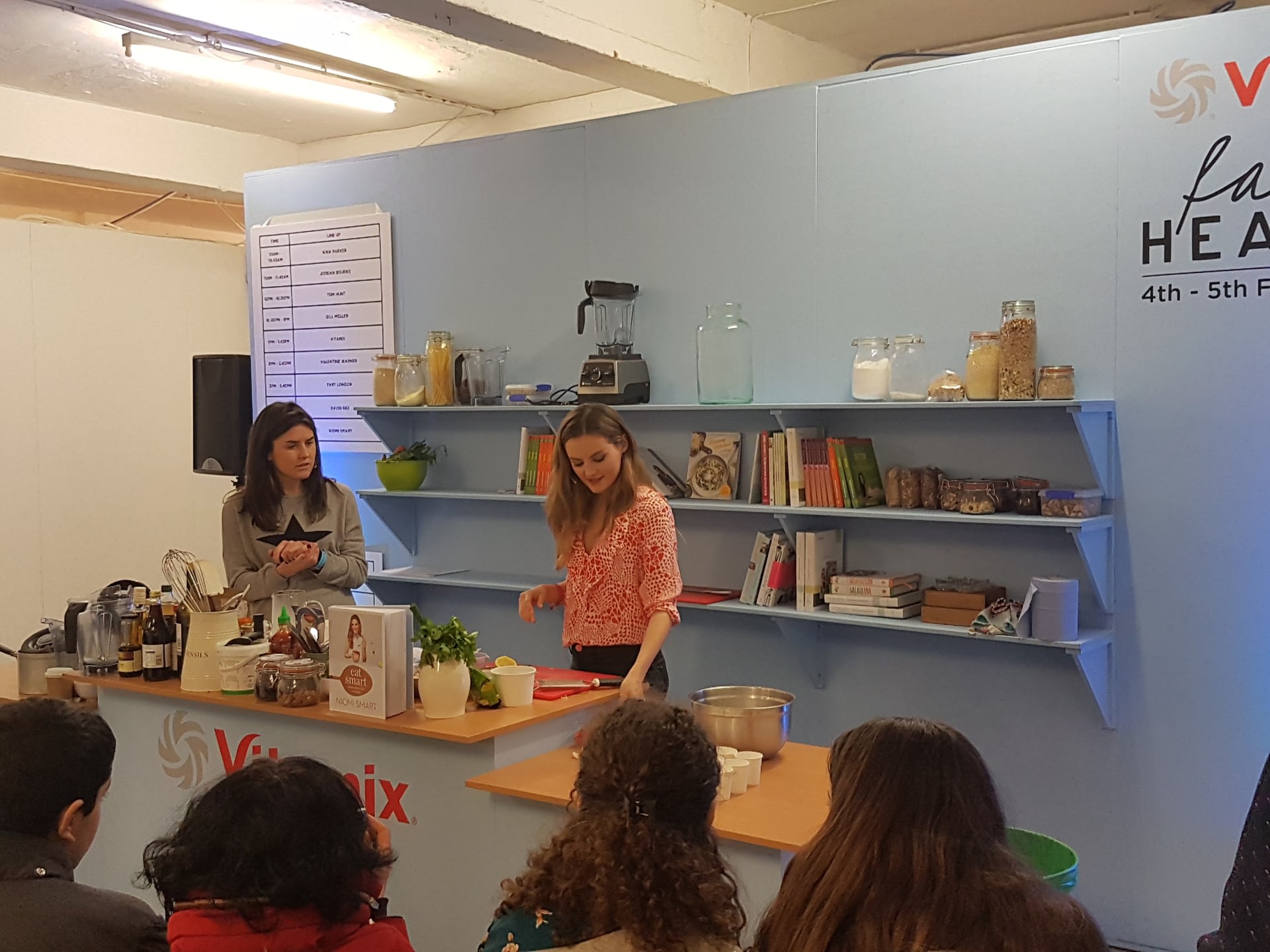 This was the outcome of her quick made breakfast, this tasted pretty decent. Also, Niomi gave out a mini taster for everyone to share with her prepped meal. After the cooking show was over. We were given a complimentary sourcedbox which was a box full of healthy natural goodies product from various brands. I will write a post soon on what I received in my pack of healthy goodness. 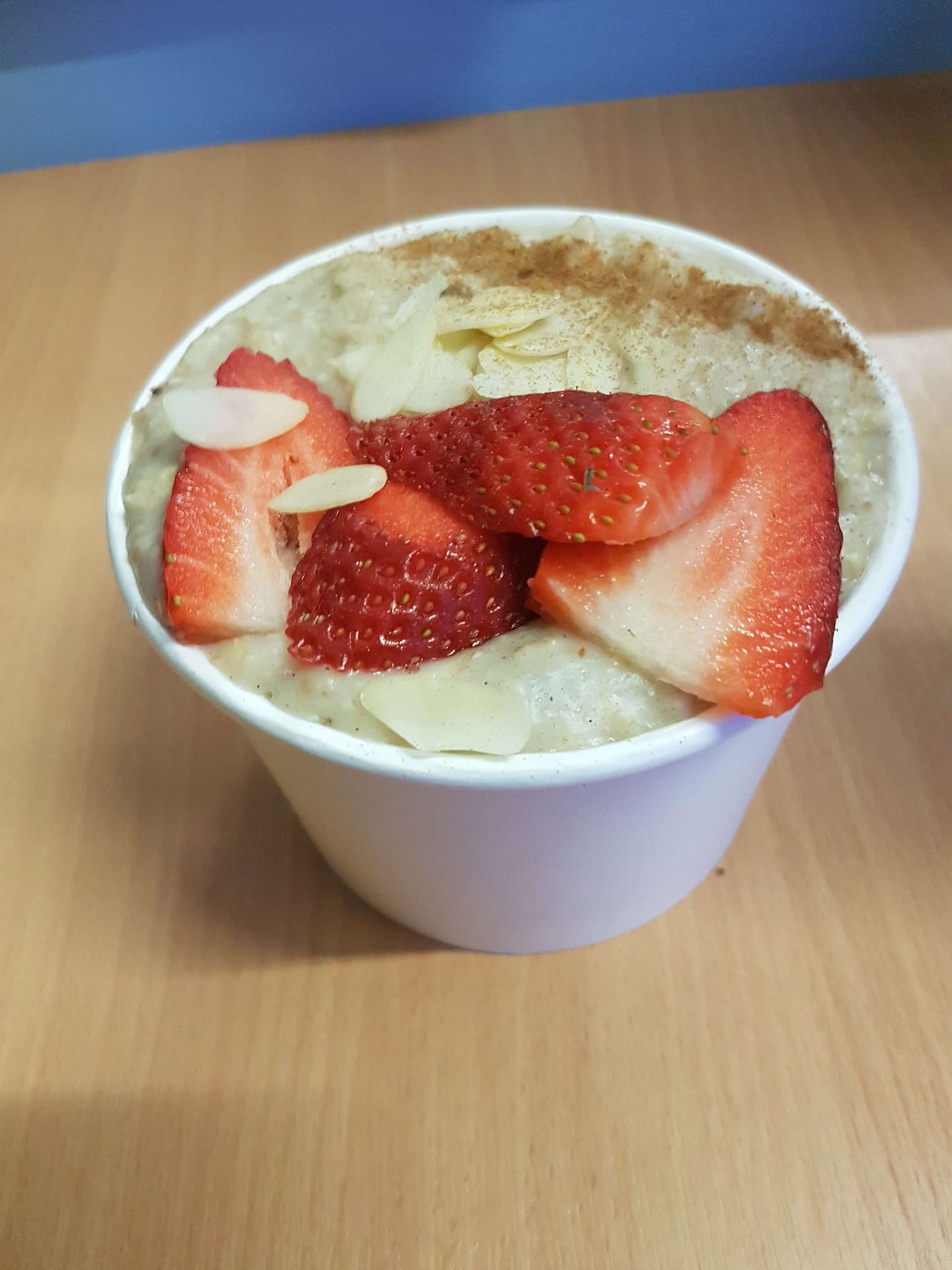 My overall experience at the Fare Healthy festival was truly great. There were tonnes of things to get involved with but I particularly enjoyed all the talks. I attended as well as tasting and exploring various new food stalls.

However, the main highlight of the day during The Fare Healthy event was meeting and seeing Deliciously Ella herself. Also, her hubby Matt, where we spoke about football as Matt’s an Arsenal fan and they were playing Chelsea that day. I did manage to take a selfie with the dream team, as shown from the start of this blog post. Make sure you go and check out her newly published book.

You can buy Ella’s newly published book called ‘Deliciously Ella with Friends‘ by clicking on the book below. 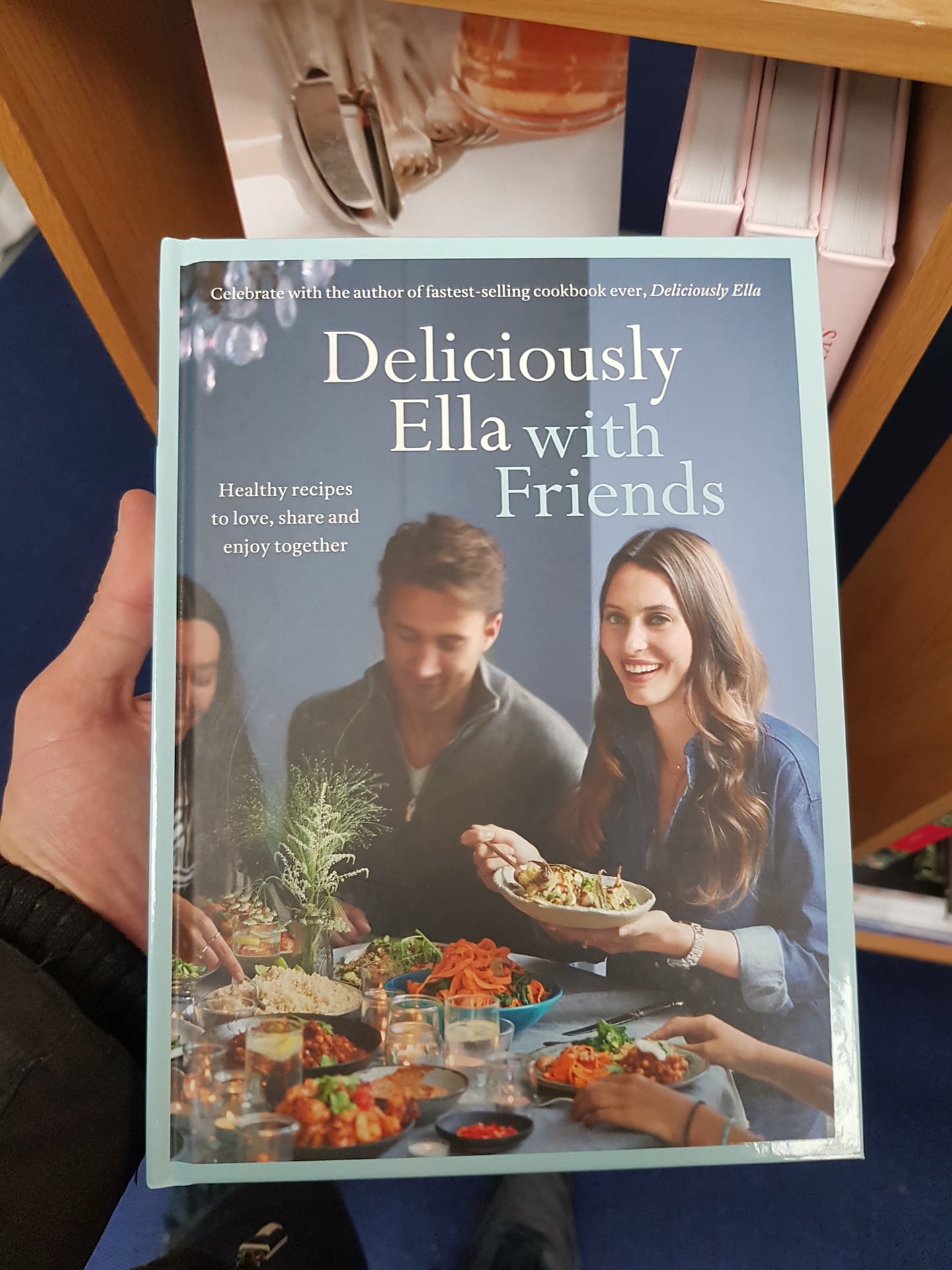 Feel free to check out my vlog below from Fare Healthy event! Don’t forget to comment and like.

Has anyone purchased any of the above 4 books?

Also, were any of you guys here before? leave your comments below. I thought the first time coming to Fare Healthy was an enjoyable experience and would definitely recommend going down next time if you are into food, fitness and yoga.

Much appreciated for taking your time out to read my blog post.